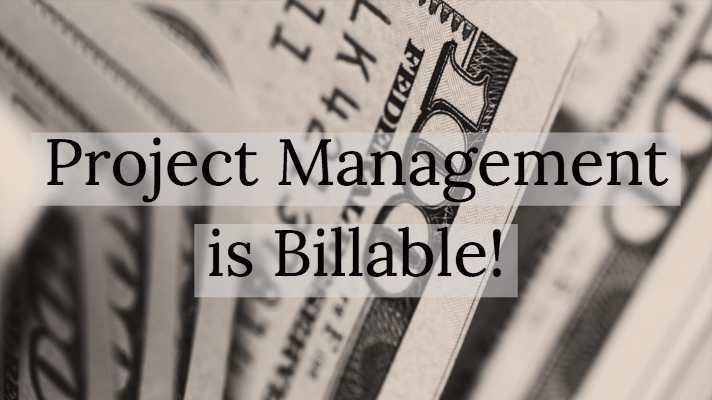 Project management is part of every job. Your team might not be doing it well, but you are doing it. By entering into an agreement with a client, you promise to complete a scope of work in a specific timeframe and budget. Someone at your company takes responsibility to make that happen.

Often a developer, company owner, or designer performs this function in addition to his other responsibilities. He drops balls. He does extra work to pick them back up. The timeline and budget extend beyond the comfort zone. Or, communication is poor. He blows the timeline because he spends so much time sorting things out. And, of course, all that time is billed to the client. So, even poor project management is billable. It’s just not what you’re calling it!

Of course, if your proposals are fixed fee or value priced, you might consider it a cost against the project. But, it is no different from the associated development or creative costs. In fact, your profits will increase due to the efficiency, effectiveness, and productivity enhancements.

Think of it this way. Would you build a house without a general contractor? Think of the general chaos! Plumbers show up before the pipe arrives. Drywallers show up at the same time as the painters. Neither have their materials. Meanwhile, the concrete truck never showed up to pour the foundation. And, without that general contractor, how do the trades get contracted to do the work? Plus, no one knows what the blueprint (read “scope”) looks like. Now, are you willing to pay for a general contractor?

Someone hires, coordinates, communicates, plans, schedules, gets quotes, manages payments. I could go on and on. But the bottom line is that a general contractor is a project manager. And, project management is billable. Clients are willing to pay for their projects to run effectively.

Most who claim their clients won’t pay for project management probably haven’t done a good job of explaining its function. And more importantly, they haven’t explained the pitfalls of going without. (Please feel free to use the general contractor metaphor above if your client balks.)

But, if, after a solid explanation, your client still isn’t willing to pay for project management, it is unlikely that the project’s end will be successful. And, that’s likely even if you involve a project manager as an unbillable or overhead expense. It sends up a red flag if a client refuses to pay for project management. Does he not want to be held accountable to his responsibilities for a successful project? Or, are he and/or his company disorganized? If he doesn’t value the work, I would consider whether this is the type of client you want.

In the end, project management is billable… one way or the other. And the addition of that dedicated function can make all the difference in how your company runs.