Project Managers – The Good, The Bad, The Ugly 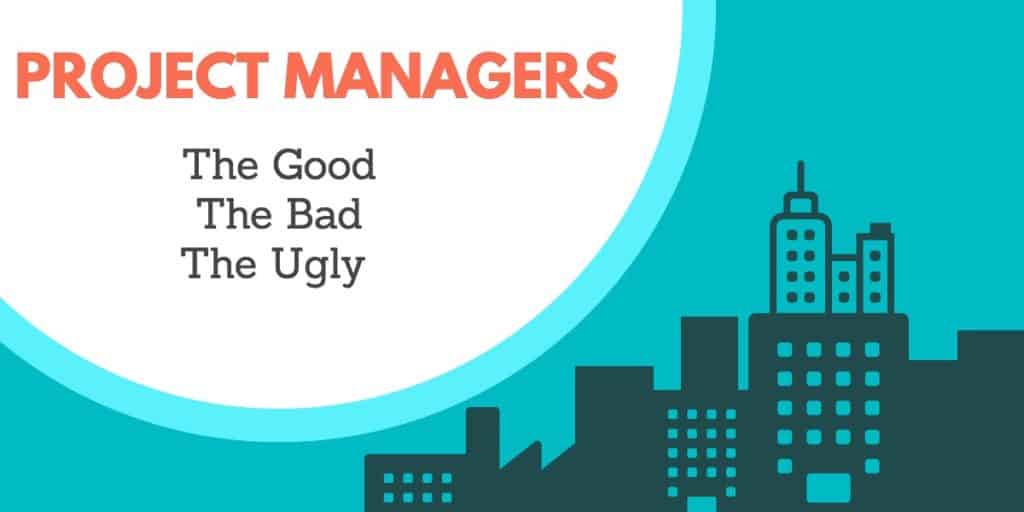 Project managers have so many shoes to fill. (Review my last post to see what I’m talking about.) Some project managers are really good; some are bad; and, some are outright ugly.

In preparing for this post, I reminisced about colleagues who are or were project managers. I instantly had a smile on my face as I thought of the people who were amazing at their jobs, including Laura Elliott. (I know I said I wasn’t going to name names, but in this instance, bragging on our team is acceptable!)

Laura is Beyond the Chaos’ project manager and she definitely falls in “the good” category. Clients compliment her skills and so do I. But why? What makes her one of the good project managers?

She doesn’t have to be reminded to do anything. She doesn’t drop balls. Her communications are appropriate to the person and situation she is managing. She lets you laugh. She knows when to sympathize… and when to cajole… and when to snap the whip. Asking for help is one of her strong suits. She has a sense of what’s urgent and what can be put on the back burner. She listens. There isn’t drama… or excess emotion. And, things don’t go wrong.

As I thought of all the project managers I’ve worked with, the amazing part is there aren’t really any “good” stories. There are people who are great at it – don’t get me wrong. (All of them put a big smile on my face as I thought of them.) But, they don’t create any good stories to tell. I can describe them just like I have Laura, but “stories” just don’t exist with good project managers. That’s part of how you know they’re good!

To some of the good ones that came to mind… David, Katie, Kate, Kim… and Kim, Amy, Russell, Joanna, Kristy, Steven, Nicole, Ryan, Bethany, Bridget, Chris, Carly, Nick, Porsche, Holly, Whitney, Bryan, Hugo, Lucy, Matt, Carmela, Eric, Rachel, Andrew, Danielle… you were amazing project managers. I was proud to have worked with you. And I am proud of what you’ve become. (I am sure I’ve left someone out… and if so, my sincerest apologies!)

One of my clients, early on, decided to replace me with a certified PMP who was more technical and had more experience in the particular industry than I did. (We shall call him Tim.) I worked with him for about 3 weeks to transition the work over. To be clear, this change was perfectly fine with me – the client was very, very difficult to deal with from a personal interaction standpoint and I was glad to be leaving. But, I wanted to leave things in a good place for the team members I had come to like, so they wouldn’t be in a bind.

Tim didn’t pay attention to the process I had set up through trial and error to work with the team, despite my willingness to walk him through it. (There was no process at all when I started to work with this client.) He didn’t take any of my warnings about particular people or situations to heart. But, Tim was very good at making charts and graphs that he could show in meetings. The client loved him… at first.

The second thing he did was jump into actually doing the work. There was a technical issue that he got involved with and was actively solving the problem himself. Meanwhile, the team member responsible for doing the work was not accomplishing anything and the overall project management was being neglected. While he was capable of solving the problem, that wasn’t his job. His job was to facilitate the work… not to do it.

Lastly, he didn’t have a good sense of urgency and tended to focus on what he could solve, rather than on what was actually important and urgent. He didn’t last long… I believe he was only there for a month after I departed. Tim was a nice guy and had some good skill sets. But, his ability to problem solve, facilitate conversations, communicate and ultimately manage the project just wasn’t good.

Now, when you get to The Ugly, you get into really good stories.

I can talk about “Steve” who left on a Friday at lunch and we didn’t hear from him again until he called in sick on Tuesday. Don’t worry… he was actually fine, but watching March Madness seemed to be much more important than advertising. His skill set was in how he talked to people. He was charming and could get people to accomplish things. But, rule #1 – you have to show up! Granted, that might be more of a “bad employee” issue than being one of the bad project managers though.

There was “Sylvia” who disappeared all the time. We just never knew if she was at lunch or gone for the day or hadn’t even arrived. She once had a job jacket thrown at her as she left an account manager’s office. While completely unacceptable, I might understand why she drove him to that behavior. The sad part was that when she focused, she had good ideas and could handle things pretty well.

Let’s talk about “Mike” who had an excuse for everything. Every project he worked on had issues. When confronted about them, Mike explained them away. And those issues raised their ugly heads the next day or week until it was painfully clear he was lying about them and just playing whack-a-mole. He had no idea how to keep things running smoothly.  Rather than ask for help or stick to the process, he just covered everything up until he eventually put a client project in jeopardy. After that, his tenure was short.

The last one I will mention was “Sandy”. She was just in over her head. She cried… All. The. Time. She cried in hallways and in meetings and in private offices. Sometimes, she tearfully pulled people aside just so they would comfort her. Sadly, Sandy made it less than a week. Part of the issue was that she truly cared and was a pure perfectionist. The details were completely overwhelming to her and she became a ball of stress.

Project management ain’t pretty sometimes! You have to handle stress and not become overwhelmed. Almost all of the examples of “the ugly” reflect how people handled stress. Most of “The Ugly” have gone on to have successful careers doing something else. They just weren’t cut out for project management.

Finding “The Good” is really hard. (And even the good ones can have bad days.) Discovering that “The Bad” are bad can sometimes be challenging. But “The Ugly” rear their heads quickly… run!