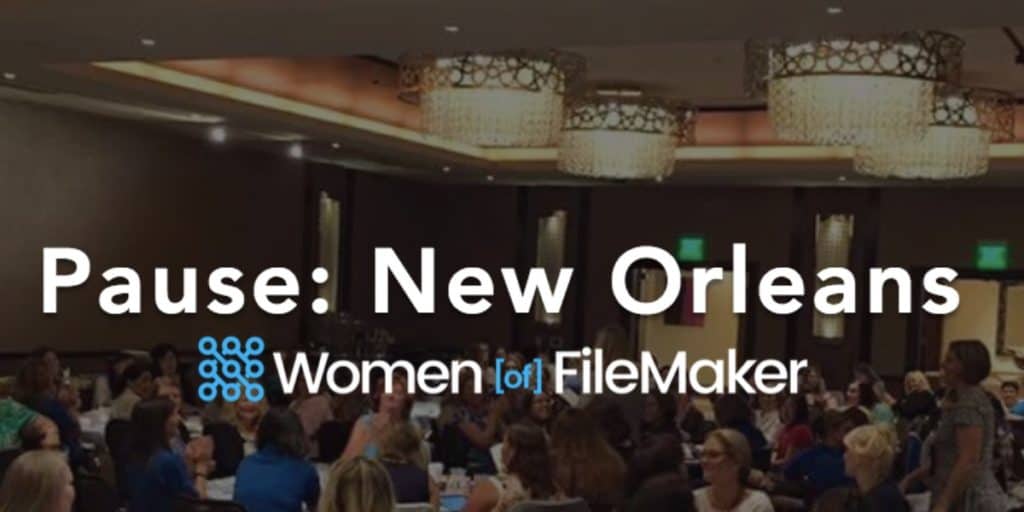 Lisette Wilson (Informing Designs), Martha Zink (Soliant Consulting) and I set out, in January 2018, as representatives of Women of FileMaker, to host PauseOnError, a project by Ernest Koe (Proof Group) and John Sindelar (Seedcode). They offered WoF the opportunity to host this tech conference, giving us a platform to “say the thing”.

Designed as an “unconference”, Pause encourages speakers to lead discussions rather than present a session. It encourages attendees to share different points of view. And, it brings together the FileMaker community in a more relaxed environment than the annual FileMaker Developer Conference does. The goal is to achieve a sense of community.

John and Ernest were nervous. They were handing over “their baby”. Lisette had worked with John and I currently work with Ernest. But even though there was a professional connection, they still had to entrust us with making Pause our own, while coaching us on what the brand’s intention is.

Lisette brought the opportunity to WoF, and, of course, she was pushed to take the lead. (Be careful what great ideas you have in a volunteer organization!) We built a committee and chose a location (Le Pavillon in New Orleans) and the dates (May 7-8, 2018). Ernest and John opened a Slack channel and invited us in.

Feeling Out the Water

After we did the business of booking the hotel (end of January), we knew the next steps were to get the early invitations out to speakers and attendees. Of course, we asked John and Ernest if they wanted to speak. And, John began the process of pushing us out of our comfort zone:

“are either of you interested in speaking?” Hmmm, potential speaker wonders: is there a theme for this Pause?

We enlisted the committee to help us come up with a theme. Our first 2 ideas were generic at best, but John pushed us:

When I mention this event to someone and they ask: 1) what’s different about a WoF Pause, 2) can men come, 3) can men present. And I think an implied question is “why does WoF want to do a Pause”. I think you need to answer these 3 in all 4 formats: in the tagline, in the theme, and in long form blog posts. And it’s already Feb.

Uh-oh. We needed to get it together! And our theme better be ah-mazing.

We realized that we were going to need to make faster decisions than what was happening in our larger committee. So, as the Lead Facilitator for Women of FileMaker, I reduced the size of the committee – and it was while Lisette was on vacation. I did my best to not hurt feelings, but it was the obvious necessity. We kept Lisette as the lead and Martha as a co-lead since she had been the one working with the New Orleans location. I stayed as the detail person/project manager. It’s worth noting that the three of us had worked together, 7-8 years ago – so, we knew each other’s strengths.

Martha jumped in and started asking some questions herself:

Who do you think you have alienated with Pause? How did you come up with the idea of POE? Was it an eff the man movement or was it uplifting and inspiring to begin with?

But, the answers were that those things don’t matter. We know there are challenges women face in tech. And, as the 2017 #metoo movement demonstrated, there were challenges in the world that women faced. This whole thing was an opportunity, and John and Ernest were empowering us to make it ours.

It’s not up to you, WoF or Pause to heal the trauma of the last year. But it is up to us to recognize it.

Our Slack channel immediately turned into a “safespace”. All of us were open and honest and talked about very challenging and emotional things throughout the remaining 3 months. Things like:

With that in mind, we stopped “doing” and started thinking… and wondering… and feeling! ALL FIVE OF US.

Ernest and John became the coaches. We became the players. And, damn, they asked us good questions, bringing out our best.

We started with the theme: #pausestandtall came from Martha, who wanted a message to women who needed a nudge or a push to feel like they can be a part. It also reflected why I got involved with WoF – to help women get past victimhood or low self-esteem and, as Martha so elegantly put it, stand tall. (You can read her inspirational poem on the Pause website…. just scroll down below the map.) The beauty of all of this is that it applies to men too.

Pause is not what we create together. It is what THEY–the attendees–feel together.

From that point on, John and Ernest told us stories of how they thought of previous Pauses… koans of how they made decisions. They thought of every detail – what would happen if you did have signs? What would happen if you didn’t have signs? Decisions were made based on the results of the action. (There were no signs at previous PauseOnErrors and there were no signs at 2018’s. The decision was purposeful – not something we just forgot to do.)

We got encouragement to SAY THE THING only we can say. And so, we set goals:

“More” was purposely vague. We really didn’t know what to expect. Would more women even attend? We wondered if we could even get 100 total attendees.

Now, I can’t tell you all the stories or all the things we discussed, because once you know how the sausage is made, there’s less magic in the eating. But, I can tell you that we talked about hard things. We shared gender-driven conversations very openly that often aren’t shared professionally – about our differences and also how we are the same. We talked about the challenges that we all face as we try to “handle” how the world is changing and we are made aware of situations that we didn’t know about before.

All of us came to truly care for each other and became friends. All 5 of us in different cities from Jacksonville to Houston to Dallas to Austin to Seattle – literally across the country. Different ages, different experiences, different politics. But, we broached our conversations with love and open minds. And we fixed the whole world. (Not really, but at times, it felt like we did!) We laughed, cried, and bonded.

And, 54 women registered – 43% of the attendees! We sold it out. People came from Australia, Canada, Great Britain, Japan, Mexico & the US. More remarkable, of the 36 speakers, 62% were women. Additionally, of all the speakers (men and women), 50% had never spoken at a Pause or Devcon before, making them fresh, new voices in the FileMaker community.

Some of the more memorable quotes from the evening sessions were:

You are smart. People need to hear your story. And you need to be the one to tell it.

And, people told their stories – both men and women. People who had never spoken in public before got out of their comfort zone and said the thing. And they all did spectacularly!

Our goals were met. Our theme was fulfilled.

If you were at Pause and saw something creative, it was Martha – from badges to stickers to the “what’s your story” tagline, including the analog forum. In addition, she found the hotel and helped us choose New Orleans as the location.

If you were at Pause and saw something go seamlessly, it was all Lisette. She took on a crazy big thing. She spoke, led, and managed all the logistics of this event, especially around speakers and schedule.

In other news, at my very first PauseOnError, I lead a discussion, “Stand Tall While Talking Money.” It was my first time to speak either at Pause or at Devcon. In a couple of weeks, I’ll share a follow-up post with more details on my Pause session. In the meantime, you can download the slides.