You are here: Home / Case Study: Peace of Mind with Two Story Systems 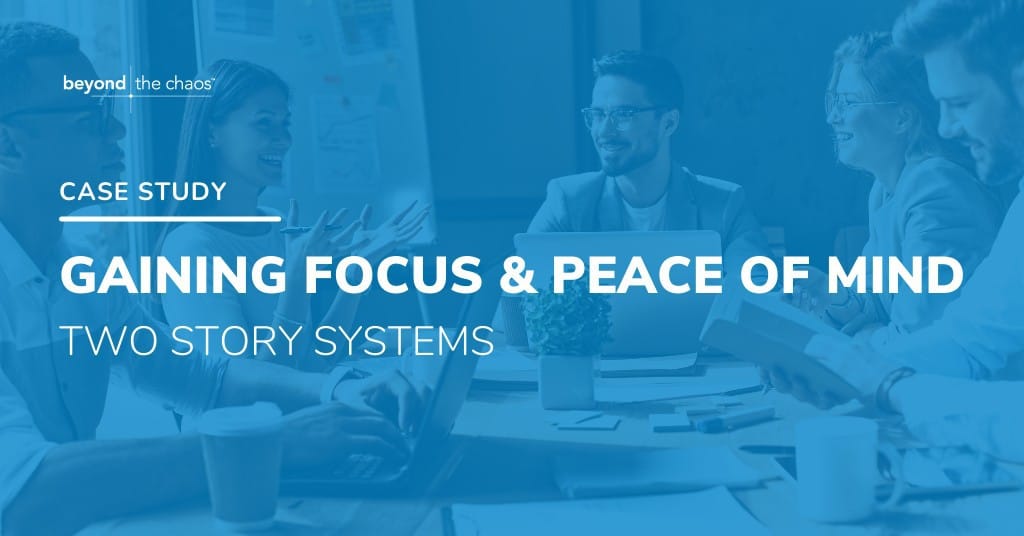 The Goal: Peace of Mind

Two Story Systems, LLC, is owned by Brad and Brandynn Stanford, a husband and wife team. As the founders, they were starting to lose peace of mind. They felt scattered. Brad was using various applications for various reasons to try to accommodate unique projects. He had a gut feel for how projects should go, but no set process to capture all of them with one method.

Meanwhile, Brandynn had a scattered process. Lists here, notes there, along with emails marked unread, until everything piled up in a big stack in the middle of the dining room table. Her “important” emails numbered close to 100. Her solution was to every now and then centralize all notes as line items on a big yellow memo pad. Then, she would begin the process all over, trying to cross off items from the memo pad before the next stack accrued.

They struggled with taking the time to ask for help. Brad thought that if he stopped work to do the work, he wouldn’t bring in money because of lost hours. Brandynn was afraid of trying out yet another organizational system only to find it wasn’t a fit. The others were too complicated, too unrealistic, or not in line with how her mind functions. Additionally, she worried that she would have to figure out how to make it work on her own. But, that search for peace of mind was too real not to reach out. So, they sought out Susan Fennema and Beyond the Chaos and Project Management Consulting.

Brad realized his initial concern about losing hours was short-sighted. Because, this service and the template we created gave him time to understand all his work needs, but it required some upfront work. At first, Brad was thankful just to be getting some help. Then, he and Brandynn got a little overwhelmed! Once Susan and the template demonstrated all of the missed tasks in their current (non) systems, they panicked a little. How could they recover from those dropped balls?

But then, after some coaching, Brad and Brandynn saw how it all worked and got with the program.

It’s the best thing I’ve ever done for my business. Not only would I recommend this service, I would ask any small business person: “How could you NOT do this for yourself?” We’re talking about getting your sanity back! If you’re wondering how you’ll ever keep up, how you’ll ever grow, how you’re going to get everything done, look no further. This is it!

The Results: Peace of Mind

Brad and Brandynn identified several results after completing the process with Susan:

Brandynn and Brad learned that they are not people just trying to check off random, useless to-do items. They are business owners and their business is valuable and beneficial. Working with Susan has put a spring in Brandynn’s step and gave her a confident posture as she approaches each day. The items she has in front of her are worth doing. Plus, she has a visual plan to get them accomplished. If she decides they’re not useful, the power of deletion is at her command.

Brad said, “This experience was not some ‘Let’s see if this works prescription. These are techniques that are proven in battle. Issues that come up simply bow before the process and get assimilated. It’s fantastic.”

Brandynn no longer feels like she’s rearranging deck chairs on the Titanic. She can order her tasks in a way that makes sense. Even if she reschedules something, she doesn’t forget it. It safely resides in its list until she’s ready to work it back into the flow. She feels much more in tune with her direction. Plus, she can see how all the parts work together to make the whole. She knows the process flows best when she stays connected to it. But, she also knows that when she gets off track, it only takes a little refocusing to get back in the groove. She doesn’t have to reinvent her systems every time. And, that thought has been quite overwhelming in the past.

Brandynn generally rejects structured scenarios as too rigid and stifling. She has preferred her own systems which were, admittedly, rather random and scattered, albeit colorful. Susan helped her see the immense value of “freedom within the form”. Susan helped her create a scaffolding which provides safety and direction for the information she handles each day, but which also gives her the ability to orchestrate that information — and make forward progress — within the framework. By acknowledging that it is difficult to organize, and solving the most pressing problems, Susan left Brad and Brandynn confident in a new direction for the company.

Brad suggested that you should find time on Susan’s calendar right now for a free consultation, and then don’t miss that appointment! “You can thank me later.”

After working with the custom Basecamp template for a while, Brad was still struggling with the challenges of having so many clients requiring the use of so many different tools. He couldn’t only work in Basecamp. He had to work in all of his clients’ tools. None of his invoicing was consistent either, having to adapt to his clients, the teams he was subcontracting for, and for placement services. They all had different requirements.

Having a centralized place (as Susan’s principles directed) to manage his subcontracting and direct client work, along with payments and his time, was becoming overly burdensome. So, being a FileMaker developer, Brad created his own simple and straightforward system based on the principles of the custom-created Beyond the Chaos template. Consisting of time tracking, billing, project management and more, Brad is excited to offer Knowpher™ to independent FileMaker developers or solopreneurs who need a way to manage their clients and their subcontracting work.

If you’re looking for peace of mind, schedule a meeting with Susan today!