You are here: Home / Case Study: A Handle on Project Management with Scott Howard Consulting 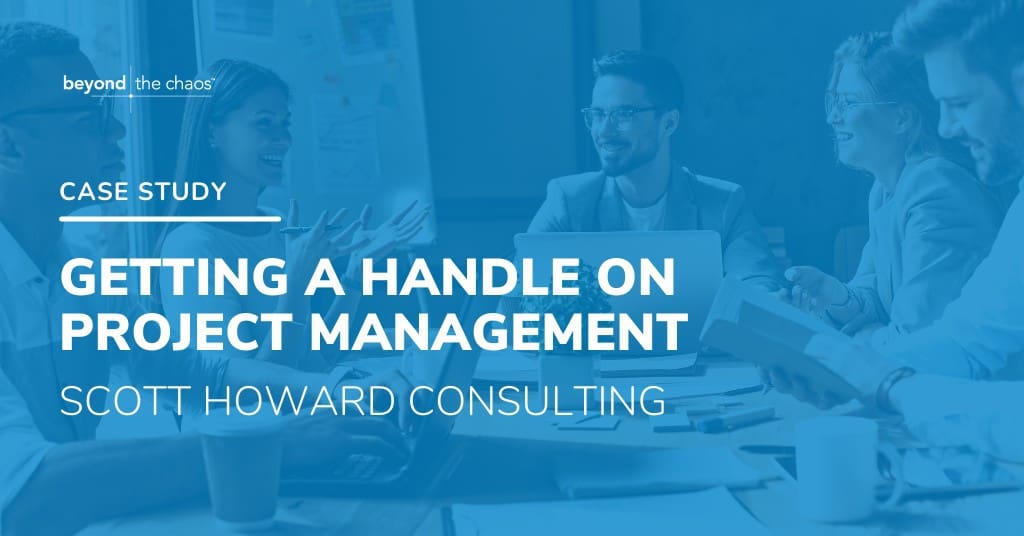 The Goal: Get a Handle on Project Management

Scott Howard, the owner of Scott Howard Consulting, was struggling with getting a handle on project management. Specifically, he struggled with managing deadlines, determining the availability of his team, and communicating with clients in a timely way. He really wanted his company to improve on managing tasks and setting priorities. “We were recording everything, but it took a lot of reading and researching to discern where things were. We used at least three services to manage projects and tasks, so it took effort to keep everything in sync and up-to-date.”

Mitzi Howard, Scott’s wife, stepped up to offer help. As a school teacher and someone with attention to detail, she had the right experience to do it. But, she was short on time. And the company only was getting busier! So, figuring out how to create a structure that could grow with the company was a challenge. Furthermore, they weren’t sure how to stay on the same page.

Had she not come so highly recommended by people Scott trusted or had the cost been too high, the company might not have engaged with Susan Fennema and Beyond the Chaos. But, with those obstacles hurdled, and the need so keenly felt, they engaged in a Project Management Consulting agreement.

The first step was to streamline the tools the company was using. Susan evaluated the usage of their various tools, and they decided together to consolidate to Basecamp 2.

After reviewing the company’s project process, Susan wanted to make sure that Scott, Mitzi, and the team could all easily use and follow the same process. Since Mitzi was part-time, the likelihood that someone else might have to figure out something on the fly was high. So, they collaborated on a custom project template so Mitzi could open new projects with all of the possible steps already in place. Additionally, Google calendars were brought in to help manage workloads. Susan helped them create a calendar-blocking process so they would know when their developers were busy and when a new project could begin.

After implementation, Susan coached Mitzi to develop solid skills so she could serve as the team’s project manager. The support process ensured that the team was held accountable for the new processes. Susan was also available to train post-implementation for how to solve some of the challenges that arose. Training the team on how to run good status meetings, improve client communications, and evolve processes were all part of post-implementation support.

The Results: A Solid System

She was easy to work with, professional, humble, and always had a good sense of humor. She could be tough too, which we really needed (still do!) to replace old, inefficient habits.
– Scott Howard

Scott and Mitzi now have excellent, user-facing instructions for onboarding clients on new projects and a handle on project management. Afterward, Scott said, “Though we still have much to learn and old habits to break, I feel like we have a much better handle on WHAT needs to be done WHEN.” Scott thought Susan brought a wealth of project management experience into her coaching. Plus, he said, “She was easy to work with, professional, humble, and always had a good sense of humor. She could be tough too, which we really needed (still do!) to replace old, inefficient habits.”

Sometimes the work can reveal unexpected gains. Scott realized another result of the process – an introspective self-awareness. He realized this while working through various tactics and changes to how the business worked. “This process revealed in me a strong resistance to change, which was a valuable and painful revelation! Susan was tough when needed but always gracious and she consistently and patiently nudged me forward.”

If you need to get a handle on your project management, schedule a meeting with Susan today!